Today’s recommendation on the TRY/USD

The exchange rate of the TRY/USD recorded a decline during early trading this Thursday morning. Investors followed good data, but it was not clearly reflected in the price of the lira, which reflects that the lira is priced at more than its real value. The current price of the Turkish lira against the dollar is a result of clear intervention by the Turkish Central Bank to control the lira’s declines.

Previous reports had revealed the intervention of the Turkish Central Bank by imposing more than 100 regulations on commercial banks in the country to control the volume of lending. This is due to the lack of expansion of inflation, which recorded a remarkable decline according to last month’s data.

The Turkish Central Bank stimulates monetary policy by lowering interest rates and at the same time, intervenes to curb lending to a certain amount. In terms of data, data published by the official news agency in Turkey, quoting the Turkish Exporters Council, revealed an increase in the total revenue from Turkey’s exports during the past year, recording $254.209.535 billion, an increase of about 13% compared to 2021.

On the technical front, the USD/TRY traded near its highest levels ever, maintaining trading within a limited range. Currently, the pair traded within the bullish channel levels on today’s timeframe, as the pair continues to rise, albeit at a slow pace. The dollar against the pound is trading above the moving averages 50, 100, and 200 on the daily time frame as well as on the four-hour time frame, in a sign of the general bullish trend for the pair.

Currently, the USD/TRY is trading above the support levels of 18.60, 18.55, and 18.53, respectively. On the other hand, the pair is trading below the resistance levels at 18.83 and 18.86, which represents the highest price for the pair ever, as well as the pair is trading below the psychological resistance levels at 19.00. Any decline in the pair represents an opportunity to buy back again. Please adhere to the numbers in the recommendation, while maintaining capital management. 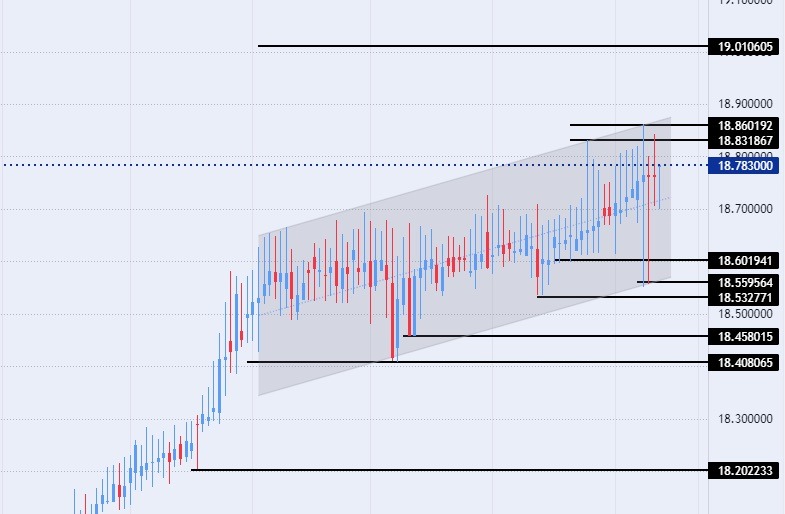 Ready to trade our free Forex signals? Here are the best Forex brokers to choose from.

It Takes a Shock for Oil to Breakaway from $85

Looking to Sell Gold This Week, As DXY Heads for 110

Cryptocurrency Was Sold To State And Local Pensions...