The difference between success and failure in Forex / CFD trading is highly likely to depend mostly upon which assets you choose to trade each week and in which direction, and not on the exact methods you might use to determine trade entries and exits.

So, when starting the week, it is a good idea to look at the big picture of what is developing in the market as a whole, and how such developments and affected by macro fundamentals, technical factors, and market sentiment. There are some valid long-term trends in the market right now, which might be exploited profitably. Read on to get my weekly analysis below.

The news is currently dominated by optimism over US inflation data released last Thursday, which showing a decline in the rate of inflation, which fell month-on-month by 0.1% while the annualized rate fell from 7.1% to 6.5%, almost exactly in line with expectations, giving hope that the Fed may be able to bring down inflation without causing a recession – even though the US is technically already in a recession by the traditional data-driven definition. Thursday’s data resulted in many risky assets advancing firmly at the end of the week.

Declining US inflation is causing an increased expectation of a slower pace of Fed rate hikes and a faster pivot to eventual rate stability, and this is pushing down the US Dollar and boosting some risky assets, even though the decline had been widely expected.

Global stock markets ended the week mostly higher, with the DAX seeing its highest level in almost one year, and the S&P 500 showing signs that a bull cross will probably arrive within the next few weeks. Several commodities are also rising strongly. The Forex market saw most strength in the Japanese Yen last week, with the US Dollar the weakest major currency.

Rates of coronavirus infection worldwide again dropped last week for the fourth consecutive week according to official data. However, there are credible reports suggesting millions of new infections after China’s “zero covid” measures were recently scrapped. The most significant growths in new confirmed coronavirus cases overall right now are happening in China, Japan, and Taiwan. There is a new omicron sub-variant becoming dominant in the USA which is causing some concern.

The coming week in the markets is likely to see a similar or higher level of volatility compared to the past week, as there are some major data releases scheduled including the Bank of Japan’s monthly policy report. The scheduled major releases, in order of importance, are:

We also see the Dollar within a long-term bearish trend, with the price continuing to trade well below its levels of both 3 and 6 months ago.

The short–term and long-term directions in the US Dollar look likely to be bearish – there are no bullish signs at all. Therefore, it will be wise to only take trades short of the US Dollar over the coming week.

Last week’s release of US CPI data showed a fall in the annualized rate from 7.1% to 6.5% which triggered selling in the US Dollar, even though it was exactly in line with market expectations, so the decline in the greenback has a fundamental reason, making it even more convincing. 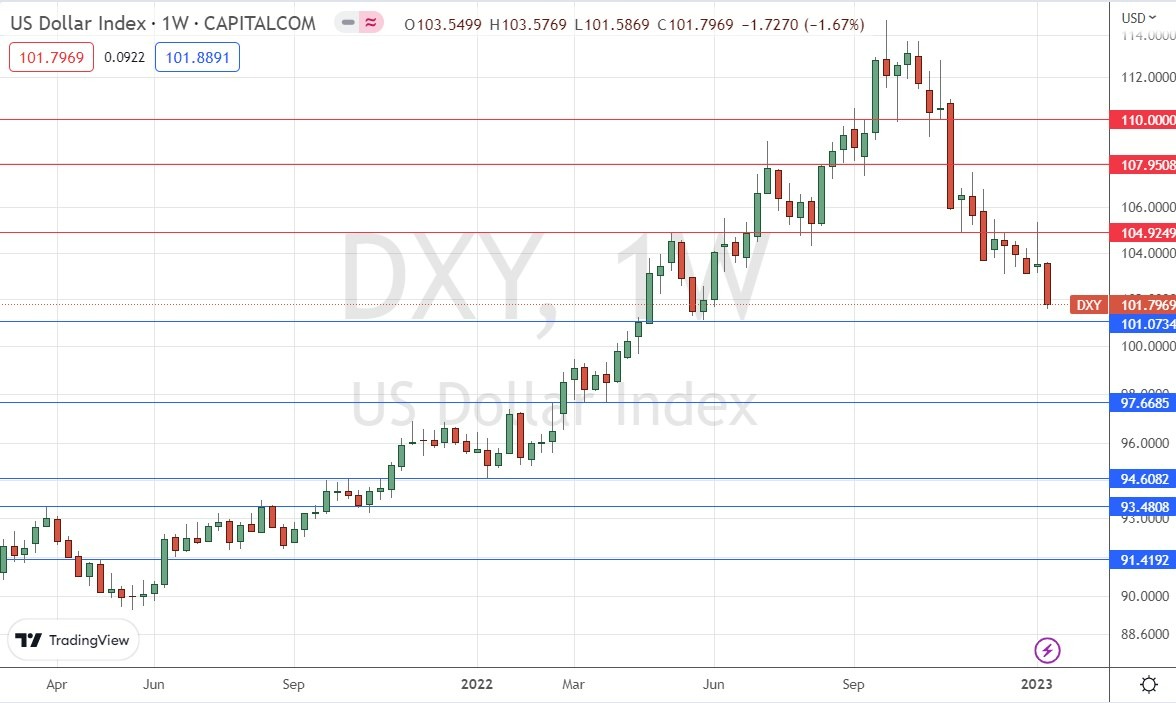 Last week Gold printed a large bullish candlestick which made the highest weekly close seen since April this year. The price also reached a new long-term high, closed well above the high of last week, and closed right on the high of its weekly range, while showing no lower wick – all are bullish signs.

The technical picture is unquestionably bullish, and we are continuing to see much better momentum here than in Silver.

The price of Gold is likely to continue to rise this week. I believe the newly rising US stock market will increase the pressure for Gold’s value to rise further. 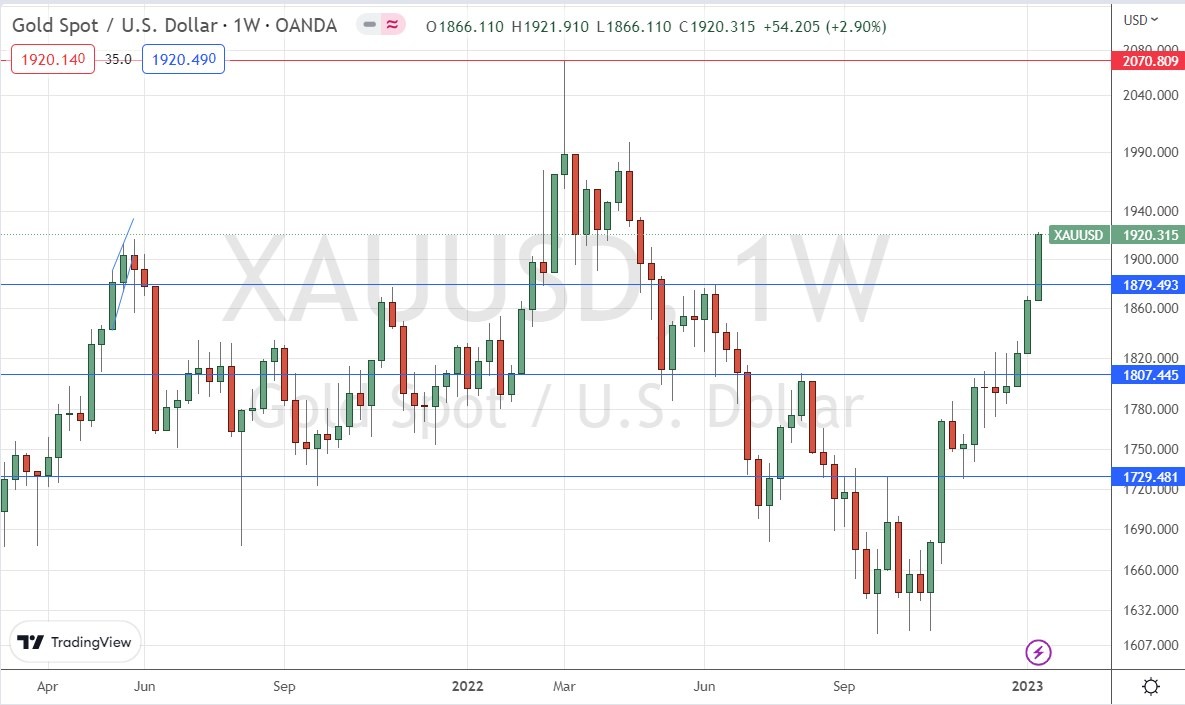 Last week saw the EUR/USD currency pair rise strongly, with an above-average range and no lower wick. The price reached its highest level in almost 10 months but may have been held on Friday by a resistance level at $1.0837. However, it is worth noting that this currency pair tends to move quite slowly, so minor retracements are nothing unusual even within very strong trend moves.

The price chart below shows how the past several bullish weeks have made a strong, impulsive breakout from the former long-term bearish trend line which had been driving the price lower.

This pair is clearly showing a bullish long-term trend, and such trends are usually statistically quite dependable in this currency pair.

I am happy to remain long of this currency pair. If the price can get established above $1.0837 later this week, that will be a bullish sign, and will probably trigger a further advance to at least $1.0900. 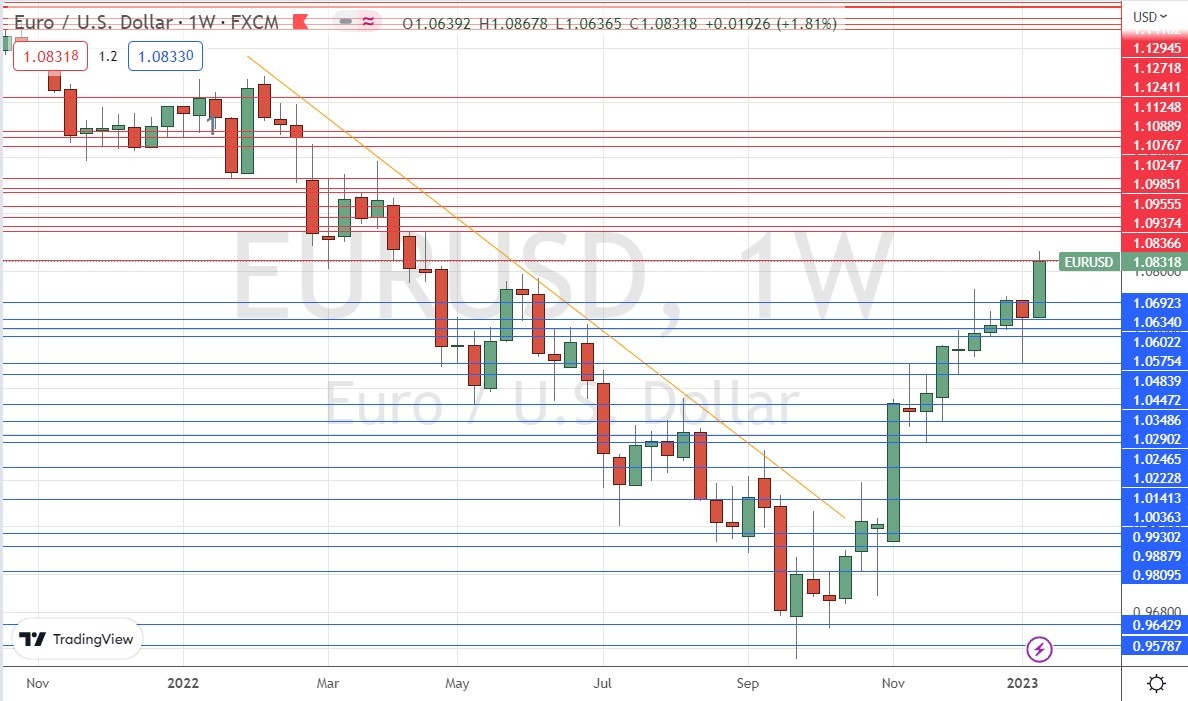 Last week the USD/JPY currency pair printed a sizeable bearish candlestick with a healthy range, closing very near its low. We continue to see a valid long-term bearish trend, with the price ending the week at a level not seen since May 2022.

This pair has been key in the Forex market over recent weeks, in focus both for its relatively high volatility and in-trend price movement, and because both currencies have been subject to new fundamental economic and central bank data.

US CPI (inflation) data released last week showed a continuing drop in its annualized rate from 7.1% to 6.5%, in line with market expectations. Although this data was expected, it triggered a selloff in the US Dollar, which is already in a strong bearish trend.

On the other side, the Japanese Yen is the strongest major currency in the Forex market, which has been partly caused by the Bank of Japan’s recent pivot away from its former extremely dovish monetary policy. The Bank of Japan will be meeting this week, so it is possible they could say something which will accelerate the trend or cause a temporary reversal.

As we still see a valid long-term bearish trend, I am happy to be short of this currency pair. 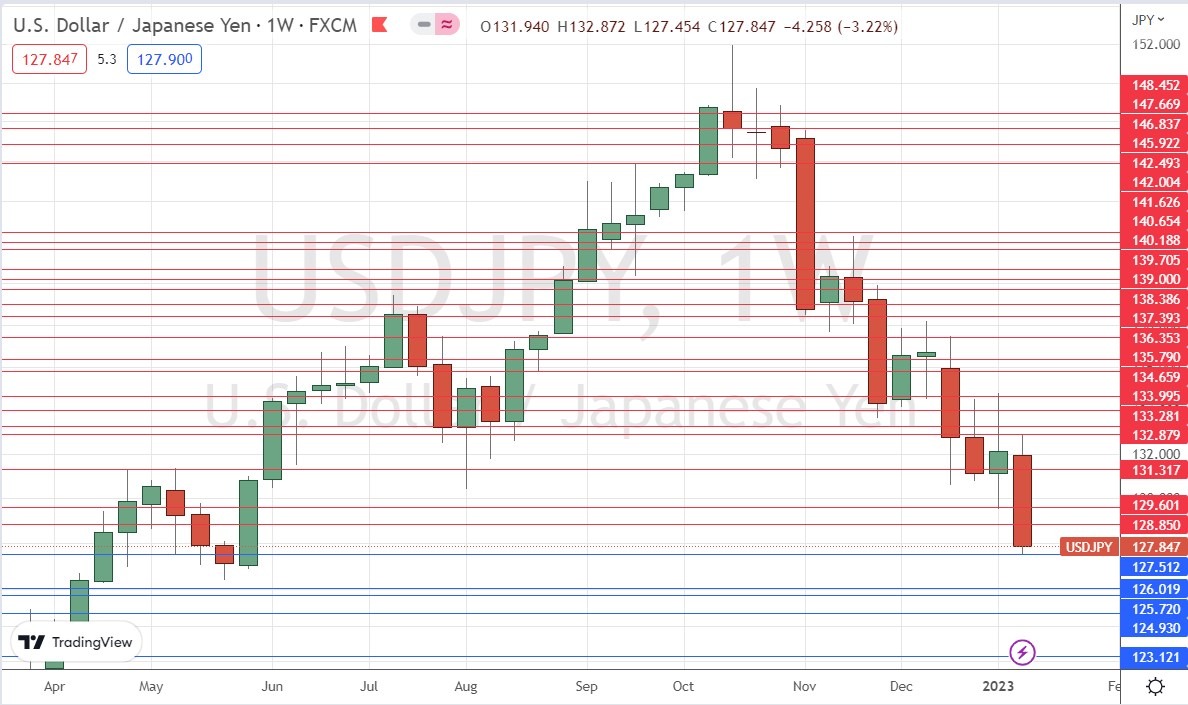 Last week saw the AUD/USD currency pair rise firmly, closing quite near its high. The price reached its highest level since August but may have been held on Friday by a resistance level at $0.6993 which is confluent with the very large round number at $0.7000.

The price chart below shows how the past several bullish weeks have made a strong, impulsive breakout from the former long-term bearish trend line which had been driving the price lower.

It is likely that we will see higher prices over the coming week, but the resistance near $0.7000 may be hard to break. If risk-on sentiment continues, it is very likely to drive the Aussie higher. 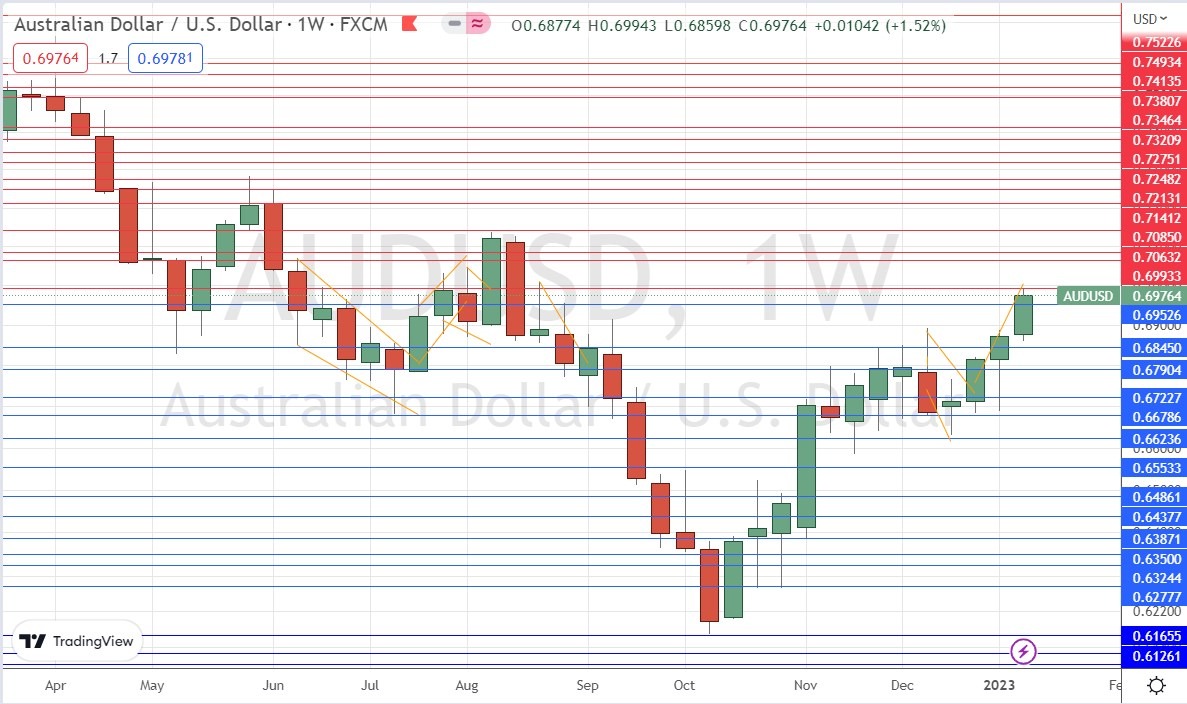 I see the best opportunity in the financial markets this week  as likely to be long of Gold in USD terms and the EUR/USD currency pair, and short of the USD/JPY currency pair also.

Ready to trade our Forex weekly analysis? We’ve shortlisted the best Forex trading brokers in the industry for you.

15 Most Undervalued Quality Stocks To Buy According...