Keep in mind that the Federal Reserve continues to tighten monetary policy, even though the market is already trying to push them out.

Keep in mind that the Federal Reserve continues to tighten monetary policy, even though the market is already trying to push them out. Plenty of speakers of come out and tried to push expectations of the pivot far down the road, but Wall Street is stubborn about it’s cheap and free money.

Waiting for a Rally

Because of this, it’s likely that we see Wall Street continue to do everything they can to rally, but we also have the specter of the possibility of an expanded Ukrainian war. We had a missile hit Poland, expected to be Russian. However, it should also be noted that it does not appear that it was done on purpose, so we have already seen about. The fears of an expanded European war being batted away so quickly does tell me just how on one side of the trade Wall Street is right now.

If we break above the top of the candlestick, then it’s possible that we can investigate the 200-Day EMA, which is near the 12,500 level. The 12,500 level will act as a short-term ceiling, but quite frankly I think it’s only a matter of time before we see sellers come back into the picture, and on the first signs of exhaustion I think that’s exactly what will happen. On the other hand, if we turn around and break down below the bottom of the candlestick for the session, then I think we could go down to the 50-Day EMA. Breaking down below that level then has the possibility of the market falling into the gap that we have that started near 11,000 just below. Ultimately, I think there is more volatility coming, not less, so the most important thing you can do is keep your position size reasonably small. 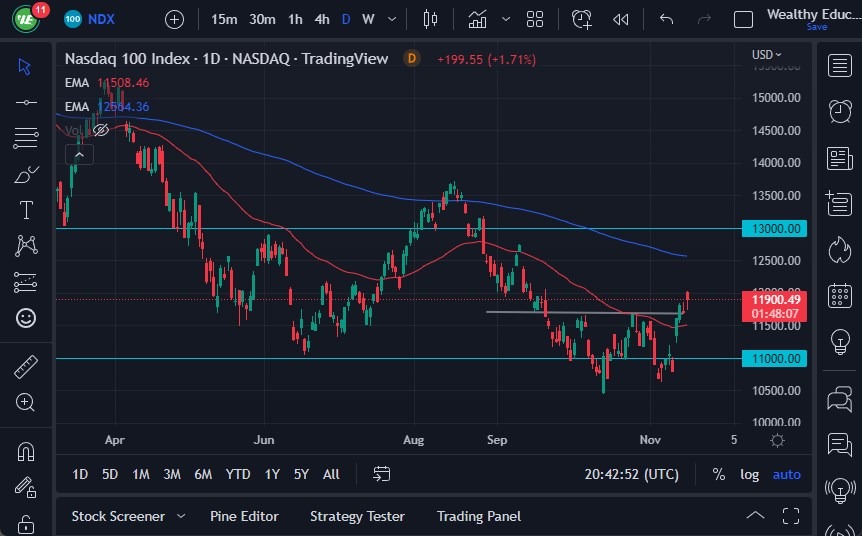 Ready to trade our NASDAQ 100 prediction? We’ve shortlisted the best Forex brokers for CFD trading in the industry for you.

Is It a Legit Forex Broker?

COP27 Failed to Meet the Moment