The current movement of the lira price shows the extent of the strong intervention practiced by the Turkish Central Bank to prevent the lira from falling.

Today’s recommendation on the TRY/USD

The TRY/USD stabilized, as the exchange rate of the Turkish currency, which traded near its lowest levels against the dollar, did not change. The lira did not benefit from the dollar’s decline at the global level, as the US currency recorded a decline against the major currencies after hints of the possibility of slowing the pace of interest rate hike in the United States.

The current movement of the lira price shows the extent of the strong intervention practiced by the Turkish Central Bank to prevent the lira from falling. Meanwhile, investors have been following the annual presidential program for next year’s outlook, which was published in the Official Gazette and includes the country’s economic policy. It included expectations that the economy would grow by 5 percent next year, in addition to other expectations that showed a decline in the inflation rate to reach 65 percent by the end of this year, with inflation reaching 24 percent by the end of 2023.

On the technical front, the Turkish lira stabilized against the US currency near the pair’s record highs, after the pair rose to 18.68 levels before retreating. The pair continued to trade within a narrow trading range that has continued throughout the current month. In the meantime, the pair is trading above the 50, 100 and 200 moving averages on the daily time frame, indicating the general bullish trend, while the pair is trading between these averages on the four-hour time frame. This also occurred in the 60-minute time frame, which shows the extent of volatility and trading in the narrow range that the pair is recording.

The pair is trading the highest levels of support, which are concentrated at levels of 18.51 and 18.42, respectively. On the other hand, the lira is trading below the resistance levels at 18.66 and 18.99, respectively. Any drop for the pair represents an opportunity to buy back again with the aim of reaching the previous high recorded during the past year. Please adhere to the numbers in the recommendation with the need to maintain capital management. 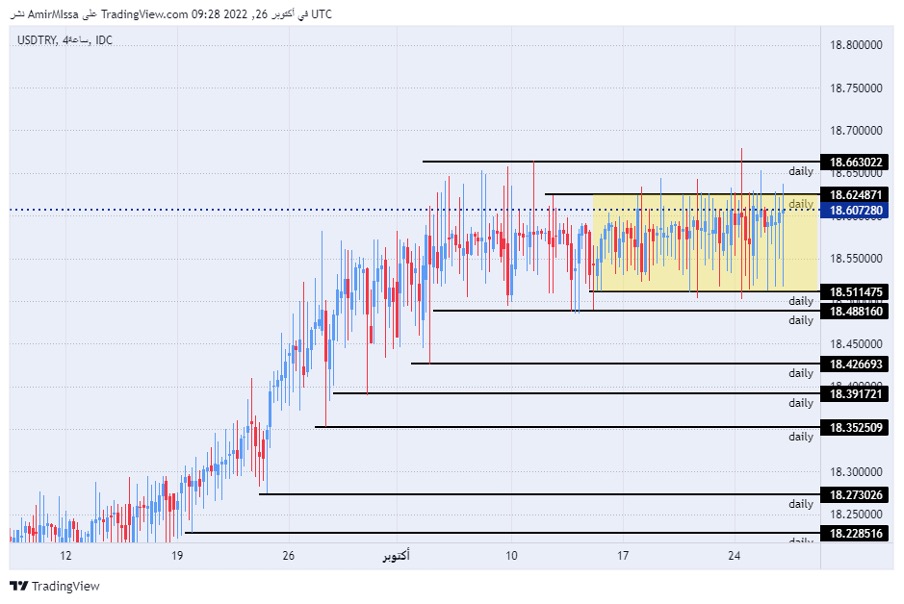 Ready to trade our free Forex signals? We’ve shortlisted the best Forex trading brokers in the industry for you.

How to Acquire a Cryptocurrency License in Lithuania

Turkey Announces the Volume of Foreign

How Cryptocurrency Changed the World of Casinos

Music in the Mountains accepting Cryptocurrency donations in...